Plot on the Landscape 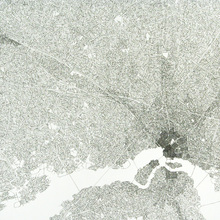 Why are so many artists and makers fascinated by maps?

Maps, as anyone who loves them knows, are all works of fiction and illusion. Yes, they help you find your way around, but this doesn’t mean they have to bear more than a considered resemblance to reality. No doubt this is why so many artists love playing with them. The overtly fictional maps you get in the front of C. S. Lewis’s Narnia books, for instance, or in Will Self’s Book of Dave, are no less useful as navigational aids to those novels (if considerably less detailed), than an Ordnance Survey 1:100,000 scale Landranger is to the bit of country you happen to be walking through. The OS map is not a miniaturised landscape, but something else. Roads are not that wide in reality, nor are they coloured like that. The land is not dotted with giant, rune-like map symbols. When you compare a map with its satellite-photo equivalent, this difference becomes very obvious: the map is revealed as a construct at some distance from reality. Take the famous London Underground map, inspired by an electrical circuit diagram and first plotted by engineering draughtsman Harry Beck in 1931: we all know how it distorts geography – especially relative distance – in the interests of clarity.

This of course brings us to that famous subversion of the Tube map, Simon Patterson’s The Great Bear of 1992. By replacing the names of stations with the names of famous people, grouped by line according to shared characteristics, he made the point that it might as well be a map of a constellation as much as an underground railway – it worked either way, it was merely a different kind of evocation. A print of The Great Bear, loaned from the London Transport Museum, will duly take its place in The Art of Mapping, mounted by TAG Fine Arts at the Air Gallery in London in November.

But for a couple of decades now, artists have fruitfully been exploring cartography in other ways. Sometimes, like Grayson Perry, they invent their own worlds, as in his 2008 Map of Nowhere, inspired by the mediaeval Mappa Mundi in Hereford Cathedral with its faith-based view of the world. Perry’s pokes sly fun at organised religion – a representation of his own body becomes the map, and when you look closely you find that the sun is actually shining out of his arse – but it is also very beautiful in its own right. An edition of this also takes its place in the show.

The antithesis of that approach is to provide commentary by making maps of recognisable places using unexpected media. Which is why I find myself in Susan Stockwell’s studio in West Norwood, South London, staring at boxes full of broken bits of computers. Stockwell has developed a mapping strand in her work, though as she says, this is misleading: really she’s an artist fascinated by the qualities of unusual materials – tissue paper, collapsed cardboard boxes, tyre inner tubes, whatever – and she just happens to have applied these to a number of map-based works.

For Stockwell, the material chosen helps to bring the artist’s voice to the party: she has made intricately-detailed Edwardian-style dresses out of both maps and paper money, as a commentary on exploration and colonialism. Some of her map pieces show today’s colonisation – her world map Chinese Dream, for instance, shows the Chinese influence spreading globally, particularly in Africa, again through banknotes.

As we speak, she has a number of stitchwork pieces on the walls, including one of Manchester’s streets in red embroidery thread on sections of an old blanket that used to belong to her grandmother (the Stockwell family hail from Manchester). She’s interested in abstracting street patterns in this way so that they start to resemble the veins and arteries of the human body: one of her works, River of Blood, takes London street patterns and overlays them onto the familiar course of the Thames as it winds its way through the capital. A new piece commissioned by the London Transport Museum as part of the cultural agenda of the 2012 Olympics is based on train and bus tickets, thousands of them, old and new, densely layered.

Stockwell sources obsolete banknotes through eBay – old pinky-brown ten-shilling notes were a favourite at one time, along with the tenners that once had Florence Nightingale on them. Another artist in TAG’s show, Justine Smith, also produces money maps (such as Old Europe and Euro Europe) among much else. For a while now, though, Stockwell has also gathered up the innards of computers, particularly the motherboards, to make her art. A large map of the British Isles hanging on the studio wall, created specially for TAG’s mapping show, turns out to be assembled in this way.

Computer innards are colour-coded, and this helps – the ubiquitous green boards convey countryside, blue wires water, and so on. Cities are indicated by lumps of fan motors, heat sinks and so forth, major routes by the wiring looms that commonly link the various parts. Stockwell builds up her maps to suggest relief, cutting and glueing the pieces. ‘They’re incredibly difficult to make, with a lot of cutting and sawing,’ she says. ‘These maps almost kill me, it’s a painful process. I do it because I think it’s a great, loaded, interesting material.’

The scale of the motherboards is best suited to larger works, and the end result has a hard, glimmering beauty. She has made several other non-cartographical pieces – some very large-scale – out of computer components. Most of her source material turns out to be only a couple of years old, such is the rapid obsolescence in this industry. But the maps keep calling, a persistent sideline. Why, I wonder? ‘The map is just a metaphor for me, as a quilt or a dress can be,’ she reflects. ‘It’s just a way of putting an idea across, working with a material. I suppose what pulls it all together is politics.’

The Art of Mapping is a large group show with some 21 artists, and the curators are presenting only a representative one or two pieces from each artist. There’s Robert Walden, for instance, whose painstakingly-drawn ‘ontological road maps’ are of wholly imagined, but unnamed, places. They start like so many American cities from a grid pattern of streets at their cores, then sprawl out from there. At times they look familiar, these patterns, and perhaps they are subconsciously influenced by real cities, but the point is that they develop organically in much the same way.

Graphic designer Paula Scher, a senior member of the Pentagram design agency in New York, makes incredibly detailed, highly coloured, almost naïve maps of real places where commentary combines with the place names. Stephen Walter has done something similar – though monochrome – for all the boroughs of London. Chinese-born, UK-based Cai Yuan’s One World, One Dream cuts the outlines of countries loose from the familiar world map and lets them float free randomly: some are recognisable, some perplexing; each is given equal value. Mountaineer-turned-artist Neal Beggs takes the Isle of Skye; he visits its highest points and records them, removing everything else so that it becomes – like Patterson’s Great Bear in this respect only – a kind of constellation.

There’s more recording of real land here. Egyptian-American artist Dahlia Elsayed uses mapping as part of the process of journal-keeping that she has done since a child: here she explores bits of island coastline in the US North West, and incorporates her feelings into the works. Emma Johnson takes places with meaning for her, extracts the cartographical DNA, and layers the information to create dense thickets of paper information – the original information having become a tangible if puzzling object.

Perhaps the most obsessive of all those on show, however, is Jeremy Wood’s work My Ghost. Wood describes himself as an ‘artist cartographer’ and often works with GPS tracking to trace his and other people’s movements. He records all his personal journeys: My Ghost replicates all of his London travels between 2000 and 2009. So many journeys that they build up into a map, clearly recognisable: he has personally surveyed the city. Expressed as white trails on black in a giclée print (a fine-art digital print made on an inkjet printer), they look like a reversed-out pencil drawing of great complexity: the brightest and thickest lines are where repeated journeys have been made.

What can one conclude? Clearly there’s an interesting, contemporary art sub-genre of mapping artists for whom the map is treated either as source material on which to build, or as the end result of a personal or material exploration. This is where art, craft, and science combine. Maps were never, from their earliest days, neutral conveyors of fact. They always contain implications – as Stockwell says, usually political. To map a place implies either ownership or a claim on ownership. In the hands of artists, this venerable business of cartographical appropriation returns to its hand-crafted roots, using new materials for new purposes.